Objectives of the Workshop:

To highlight the importance of climatic changes on water resources. Obvious climate changes impacts are an increased risk of flooding, increased intensity of extreme weather events and decreased water availability in many water-scarce regions. These impacts will directly or indirectly affect both water resources and water supplies. Managing water resources under changing hydrological conditions poses a new challenge to European water sector and particularly to water operators. EUREAU has an active interest in water and climate. Recent events regarding this subject increase that interest. Among the objectives are included the followings: The impact of climate change on water resources (quantity and quality); examples of coping mechanisms and adaptive strategies; and developing a draft strategy for EUREAU.

EUREAU: EUREAU is the European federation of national associations of drinking water suppliers and waste water services, representing thousands of water utilities that provide water services to around 405 million people across Europe. Our members borrow water from the natural cycle, treat it when necessary, distribute it as clean and safe drinking water, collect it as waste water and give it back to the water cycle as treated waste water. EUREAU’s members are deeply committed to sustainability in all aspects of their activities and fully support the goals and principles of the European water framework directive. Besides, they reflect the full diversity of the European water services sector and represent both public and private operators.(www.eureau.org)

Hellenic Union of Water and Wastewater Enterprises: The Hellenic Union of Water and Wastewater Enterprises was established in 1989. It is located in the city of Larissa. The Union has 175 DEYA (Municipal Enterprises for Water Supply and Sewerage) members all over Greece. They have been established by the Law Ν. 1069/80 since 1980. The major objectives of the Greek Enterprises are the urban water supply and the management of wastewaters (collection, treatment, and disposal).  The Union serves as consultant and represents DEYAs to the Greek Government. It has been involved in several national and EU projects, mainly pilots. The Union of DEYA is run by an eleven member Board of Management consisted by Mayors. The Union became full member of EUREAU in 1993.(www.edeya.gr)

Official Language of the Workshop:

English with simultaneous translation in Greek

Central Union of Municipalities and Communities of Greece (KEDKE)

Municipal Enterprise for Water and Sewage of Chania (DEYAX)

PROGRAMME OF THE WORKSHOP 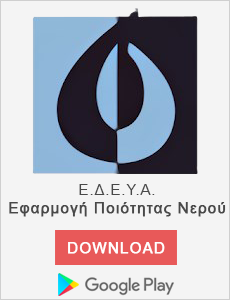